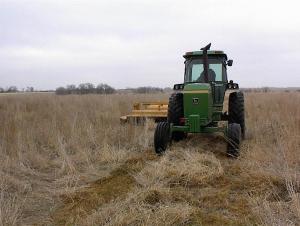 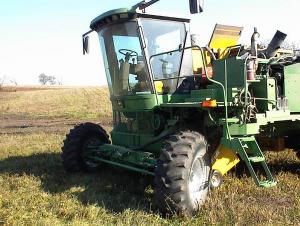 Switchgrass is harvested at the farm annually after the first killing frost in early autumn. The project currently harvests around 4 tons per acre; however yields are expected to increase to 6 tons per acre during commercial operation. The harvest process can be performed by either a traditional pull-behind large square baler or a self-propelled baler developed for the project. The self-propelled baler was developed for difficult terrain and could reduce the costs for harvesting switchgrass. Since harvesting and handling costs are the largest component of the total production cost, the self-propelled baler was developed to lower the production cost. The self propelled baler has operated 1,000+ hours and baled 30,000+ bales and has these advantages over the pull-type balers:

To view other steps in the Chariton Valley Biomass Projects cofiring cycle, click on one of the links below: